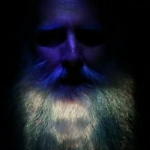 Jeff Mihalyo, Senior Art Director, has been involved with media, entertainment, and information design for over 25 years, was one of the founders of WORKSHOP 3D, LLC.

Following his graduation from Otis/Parsons in Los Angeles, he has been a producer for Microsoft, DreamWorks, Nintendo, RealNetworks, McGraw- Hill, Disney, Jim Henson Studios, Comedy Central, Scholastic, and many other household media brands.

He has participated as a graphic designer in both the 1980s LA surf and skate scene and the 1990s Seattle Grunge scene. He has experience as a set designer, lighting designer, and web designer. His interface designs are award-winning, as is his public art.

His artwork has been exhibited in Seattle, Los Angeles, Beijing, Santorini, Moscow, and Berlin, among other places around the United States. His commercial work has been seen around the world printed on clothing, packaging, and software, as well as appearances in video, film, and television.

apps for Android and iOS